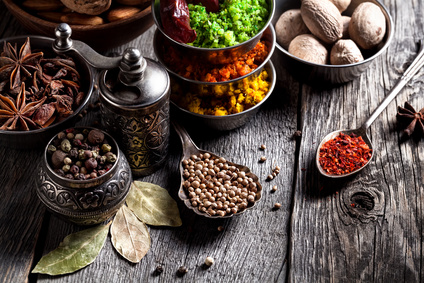 Ayurveda is not only the oldest medical system in the world, but also the most alive one, still accessible on the Indian subcontinent. To describe Ayurveda only as an Indian medical system, would not do justice to it. Ayurveda is based upon the natural cosmic and creation laws. It implements in a very systematic way the culture of separate principles and applications, that can help people in their daily lives. Health and personal development are basic components of Ayurveda, as well as the deeply affecting strategies for treatment of diseases.

No wonder! In Ayurveda, there is a very detailed knowledge about the relations between nutrition, absorption, digestion and metabolism, related to different types of people and disease symptoms. Nutrition is one of the five pillars in Ayurveda, besides relaxation, movement, purification, mental and spiritual health guidance.

Anyone that wants to implement the Ayurvedic diet, first has to incorporate in his daily life some general principles:

To follow the Ayurvedic diet, doesn't mean to eat necessarily Indian food. Our physiology is the expression of the local laws of nature. Therefore, regional and seasonal food is the most valuable for our well-being.

The meals should be freshly prepared, and ideally with organic products. Ayurveda considers cooking as the first step of the digestive process, and that’s why an important support for digestion and metabolism. Only people with very strong digestive system can break down round the clock the indigestible cell walls of raw food, without creating undigested residues (called Ama).  Well cooked meals are important especially in the cases of limited digestive power or already existing health problems.

Meals should be balanced, containing, if possible, all six tastes:

In order to achieve that, in Ayurvedic cooking  spices are used very skillfully; and they also have far-reaching healing effects.

Ayurvedic diet techniques are targeted specifically at keeping in equilibrium the individual structure or correcting imbalances, before they develop into diseases. The same laws of nature, which are represented in humans, are expressing themselves in food. Ayurveda regulates health through three vital principles (vata, pitta, and kapha), which are expressed in the five elements: earth, water, fire, air, and space. People, as well as the whole creation, represent those principles in different forms. Too much Vata can be balanced through food with less Vata. This principle – to bring into balance the same with the opposite – plays a major role in Ayurveda.

If you want to achieve a solid implementation of ayurvedic principles and to get competent treatment strategies, it is best to seek the assistance of an experienced specialist in Ayurvedic medicine. There are national diplomas for Ayurvedic naturopathic medicine since 2015 in Switzerland; and therefore, a proven, high-quality standard for therapeutic treatments.

Ayurveda is more than Wellness. Ayurveda is “the knowledge of life” in all its shades!