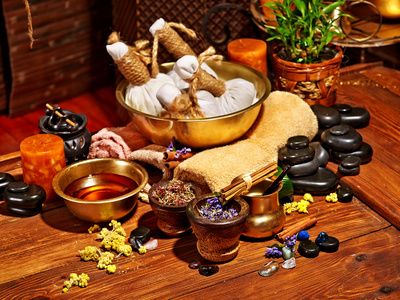 Ayurveda Massage and Siddha Treatments from South of India

So much has been said and written in the western world about ayurveda treatments and ayurveda massage! Almost as much as about yoga. But still so many people keep on wondering what is actually an ayurveda massage. Is it really something different? Or is it the same like other known classical massages but only using herbal oils?  Do we really get all the benefits what they promise by having an ayurveda massage? These are all common questions that people have.

Ayurveda is one of the oldest healing systems in the world with thousands years of history. The main concept of ayurveda is to prevent a disease rather than fight it. And prevention requires to follow health routines and regimens in a systematic and disciplined way.

Let us take one of the most popular ayurveda massages in the West – Abhyangam – where plenty of warm medicated oils is used. In the traditional ayurvedic system Abhyangam is used to prepare patients to undergo “panchakarma therapies” – a series of treatments consisting of five ways of body purification and detoxification. Normally ayurveda treatments last minimum from 7 to 28 days or more according to the intensity of a disease. If you want to feel the benefits from Abhyangam, you will need to do it at least 3 to 7 days in a row.

And here we suddenly face an increasing problem of the modern world: where to find time for this? The new millennium requires ayurveda to adapt to the needs of a modern person. If we look back in the history, we will see that ayurveda remained only for the elite society in India where the problem of time did not exist. The upper class people could devote as much time as necessary to their treatments. However common and working class people could not afford this luxury. They had to find faster solutions to get cured and get back to work as soon as possible.

And such a solution did exist! Originating from the south of India there is an intensive traditional system of medicine called “siddha”. In the siddha medicine powerful herbs and oils and deep tissue massages are used that help people get immediate relief from all sorts of physical problems which could also be an ideal solution for the modern life where time is always an issue and much faster cure is needed.

One of the examples is the “siddha-marma” therapy – the most notable and efficient part of the siddha medicine. The marma points are the vital points in the body. By stimulating them, blocks are released and deep-seated toxins are removed leaving a person feeling as newly born just after one treatment.

The philosophies of both ayurveda and siddha medicines are similar and go hand-in-hand. Main distinction may be that ayurveda does not include intensive physical treatments compared to the siddha tradition. Siddha is a powerful remedy for a big number of physical discomforts and it is slowly regaining its glory as an important alternative therapy.