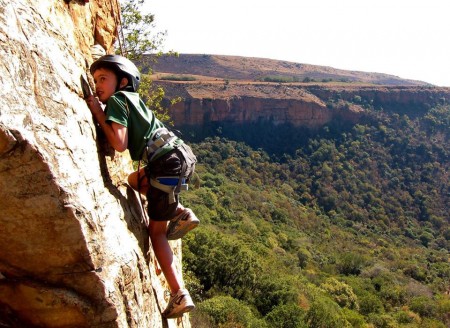 The Sport for Kids who Hate Sport

“At school I didn’t think of myself as athletic. I was always told I wasn’t. ‘You don’t play rugby, you don’t play cricket, you’re such a loser.”

It’s hard to look at a photo of 50-year-old Michael Cartwright climbing an overhanging wall in Spain and imagine he was ever anything less than a naturally talented athlete. 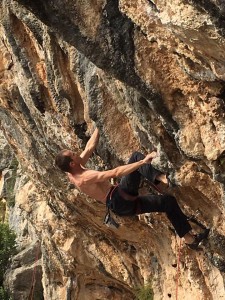 Michael is a South African climber who now lives in New Zealand and I first met him through the Mountain Club at our university in Johannesburg. We had the same experience of being bad at school sports, always being chosen last for any team, always uninterested in the sport and a disappointment to our peers. He called himself a geek, I thought of myself as square, we both withdrew from sport and found validation in mental activities. Yet thirty years later, we’ve both spent much of our adult lives being far more athletic than our schoolmates and we won’t be slowing down any time soon.

The activity that made the difference was climbing and we both wish we could have started at a much younger age. So why can climbing be such a revelation to the kind of child who doesn’t excel at conventional sport?

As a teenager Michael attended an all-boys boarding school. “There were only 16 boys per form in each hostel. Any house team, any cricket team, you pretty much had to participate. As someone who really wasn’t into team sports, you always felt like an outcast. The only thing I ever excelled at in school was cross-country and I liked it because it was a way to connect with my brother who was a few years older than me and a cross-country hero. He was the sportsman of the family and we had very little in common.”

Michael liked hiking in the nearby gorges and scrambling around on the cliffs behind his house. “I had a kind of primal attraction to it, but it wasn’t because I thought of it as a sport.” At the age of sixteen he set out to try climbing with his friend Rafe. “We had no idea, no clue. We actually had a real rope. I think Rafe might have inherited it from an older brother. Rafe had made harnesses on his mom’s sewing machine with seatbelt material, with regular cotton thread. We also had one carabiner. So we twisted the rope through the carabiner and clipped it into the harnesses he’d made and rappelled down a cliff. It was a good thing we didn’t weigh a whole lot!”

Thirty years later it is much easier (and safer!) to start climbing, indoor walls exist in all cities and many towns. They all offer gear for hire, and provide supervision and instruction. Children are welcomed. Kids can climb safely outdoors as well, although parents do need to understand all the safety issues involved. “It’s important to acknowledge that outdoor climbing is dangerous,” says Michael. “The danger is obvious, in a dramatic way. But all sports have risks. My brother broke his neck playing rugby. With proper instruction and repetition, climbing is a very safe game to play, but it’s not the sort of thing to just dive into.”

When Michael got to university he (like me) signed up for the Mountain Club. “I didn’t think I was signing up for an athletic activity, I thought we’d be exploring mountains. It was a bit of a shock when I realised this is quite serious!” Michael quickly discovered he was a very good climber and he went on to win Rockmasters, South Africa’s first ever indoor climbing competition. “It was a turning point in my relationship with my brother. This realisation that I can do stuff that other people can’t do.” 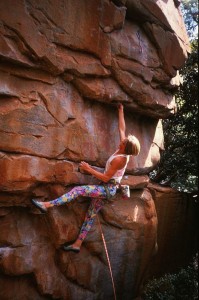 All these years later, Michael doesn’t have children of his own but his younger sister has two young boys, both high-energy little hellions. When I spotted photos on Facebook of Michael herding a flock of small kids up big cliffs, I asked him for his tips on getting children involved in climbing. He admits that you need to persuade the parents at first. “It is such a gender thing, the guys are so mellow, the mothers (other than my sister) are so concerned. I think the mothers are more attached to reality, when the —- hits the fan they are the ones who end up dealing with it all. There’s definitely a difference in terms of the reaction, you have to sell it to them. But after the first day, they were all 100% sold.”

1. You can start children climbing very young but don’t expect too much at first.

“When you have a 4-year-old kid they are more interested in playing with the toys. They want to play around with the harness and swing on the rope. As a parent your objectives are: I want my kid to get to the top of the climb! No, that’s not why you’re here. Your kid doesn’t necessarily care, or even understand that there’s a ‘top of the climb’.  Just play.”

2. Don’t push them past the point when it still feels like fun. 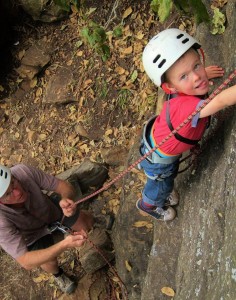 3. Go in a group, the kids motivate each other.

“Find the parents of your kid’s friends, and sell them on the idea. A bigger group is easier. The kids feed on each other, seeing the other kid getting high, and thinking: I should try that again. There’s a joint enthusiasm. And there’s less pressure on them than if there is only one kid there. It’s also a lot easier to keep an eye on kids with a few more engaged parents involved.”

4. Get the adults to have a go too. It can be great for a child to realise they can do something their parent can’t.

“It’s quite something to see how a kid reacts when they’ve just climbed it, and now it’s dad’s turn – and dad can’t do it. Like there’s no way dad can do it. He just doesn’t have the physique. The kids have no weight so they don’t need power. For a six-year-old, this is probably the first time this has ever happened to her.”

“In this day and age with parents showing off pictures of their kids all the time – go for it! The picture of the girl climbing the crack, I know she was stressed. You can see from the look on her face she’s close to blowing it. But that photo posted online so that her friends can see it – victory! Her friends don’t know she didn’t go any further.” 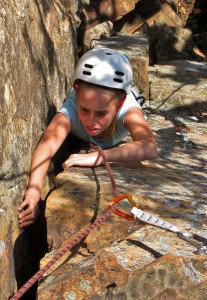 Climbing is as much a vocation as a sport, and many of the friends Michael and I made in our university mountain club are still active climbers thirty years later. “Think of our peers from school,” said Michael, “thirty years down the road, how many of them are still athletic and healthy? This is an activity that sticks with you your entire life, it’s not something that’s just for your prime.

“I think part of the reason it carries on forever is the way that it started. The primary competitor here is yourself. It has that in common with marathon running. Why do thousands of people enter marathons when they are not going to win, they’re not going to feature? They’re competing against themselves and their personal bests. I think climbing has that too, it has serious long-term value for kids, if they get addicted. Addicted in a good way. It’s not like we don’t have careers. A large proportion of climbers are regular people with regular jobs, but I think have a much more balanced life than most.”

If you want to know more before committing your child, the BMC (British Mountaineering Council) has a useful booklet, A parent’s guide to climbing, walking and mountaineering, available for free download

An excellent article by professional climber Steve McClure who believes in taking risks with his kids.

Climbing often suits people who don’t enjoy competitive sports. However, there is also place for competition in climbing, if that is your thing. For information on climbing competitions in the UK for young people. Competition climbing will be an Olympic sport in 2020.