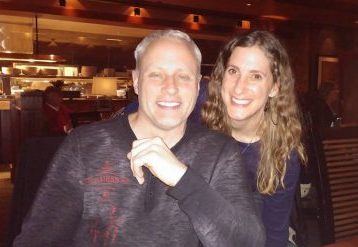 Growing up with food allergies

I’ve been battling food allergies since I was about 13! Back then they were more of a food sensitivity by definition rather than a true allergy. 🙂 Personally I don’t think the definition matters so much. My body had a negative reaction to certain foods. I can’t tell you my story without sharing part of my dad’s story.

It was my dad who made the discovery after many years of suffering from debilitating migraines, that only got worse as he got older. About the time he was 40 he was so feed up, he went to the library to do his own research, after waking up at 2 am with an uncontrollable, relentless migraine. He had been asking his family physician for help for years with no answers!!!

He spent most of a Saturday looking up food allergies/ intolerances and making lists. He also created a journal for himself. While he journal almost daily for 3 years he discovered his primary food issues in a few short weeks!

At this time my sister was 8 years old, also experiencing severe migraines. After my dad made his own discovery, he looked across the dinner table one night and said, “my 8 year old shouldn’t be taking 2 Excedrin every day for migraines.  She’s too young to need that dosage so often.” So he said, “what if you have the same food issues I do?” Then a few minutes later he looked at me, a 6th grader with severe, cystic acne,  and said ” what if you have them too but they show up as acne instead of migraines?”

You can imagine my sister and I weren’t really on board with this idea when you translate that to, “no more pizza and chocolate cake at your friend’s birthday parties”!!! Needless to say neither of us took on his advice quickly but as mom cleaned out the kitchen from foods dad couldn’t have and my sister and I started to dabble in this idea we both came to realize he was right. Now, my sister went on to fight this until the age of 32 by having 2 Excedrin first thing in the morning so she could eat what she wanted!!! I did not have that option. Which I now appreciate, knowing I wasn’t poisoning my sister with medications for all those years.

After finally caving in to accepting this my acne did slowly clear up and by high school I looked much more normal. (still had visible scarring though). Late in college I realized I could have cheese and chocolate back a little. I found I could tolerate a couple slices of pizza or some chocolate. As long as I didn’t have them both in the same day and had a few days between each.  That was totally fine with me!!!

However, between Thanksgiving and Christmas of 2013 I was tested and diagnosed with celiac disease…..and 13 other food allergies! Yay! I was in so much pain by the time I got diagnosed I didn’t care at all about getting rid of gluten. Then I looked at the list of others! Initially I remember thinking, this isn’t so bad, I know there are a lot of alternative foods out there and at least this will “force” me to eat better! By better, I mean more veggies. Lol. I also thought, I don’t even know what half of these items are on this list or where to find them how hard can that be to avoid? Turns out, VERY. All the alternative foods to the first half of the list were nearly guaranteed to have the second half of the list!!

If you’re interested, that list was – gluten, dairy, eggs, corn, oats, soy, sesame, hemp, tapioca, amaranth, sorghum, millet and be careful with potato!!!! So what’s left? Lots of fruits and veggies!!! Meat is fine but you have to be very careful of all seasonings past salt and pepper!!

My doctor told me, perhaps over time I can have some of these foods back.  What I have found is a lot of doctors don’t discuss this with their patients. From talking to people they get overwhelmed and non-compliant, either right from the get go or later down the road. The way this works is, you might be able to get some foods back if your body has not made antibodies against the foods in  question! I was initially told in order to test this we would have to wait for my numbers to fall because they were too far off the charts to test accurately.

So because the tests are expensive I was super compliant for the first year and then got retested. I was lucky and got a couple items back! Yay!!! Eggs was one of them!!! So, then I followed the results of the new test for a year and got retested. I got a few more things back. I tried to be careful as I added things back and tried not to have them daily or multiple times a day.

So that is the new way I treat my current food allergies but gluten and dairy are out for good, is what I have been told. Soy and oats are still out.

Dealing with this many food allergies has forced me into the mindset of eating for health and fuel first. Don’t get me wrong, I want my food to taste good. I’m not so focused on eating for fuel that I’m ok with my food tasting like dirt…lol. I know a few people who can do it that way!! Kudos to them!!

I still throw myself an internal pity party once in awhile before going out with friends. I resolve to myself though to get over it and enjoy the company I go out with. My hubby is very supportive and lets me vent as I need. He stands up for me when I can’t in difficult social settings. Fortunately I have a good friend group who also care about taking care of their health. Some of them have overlapping food issues with me, the others are just supportive and understanding. I make sure that when dining out,  I’m out with this group more than other groups. I make it a priority to eat mostly with those who get it, or at least try to go to restaurants I feel safe eating at. This group is largely my friend family vs actual family.

It is a mind shift and does take time. You will have sad moments and pity parties. Don’t hold on to them though!! Focus on eating for your health, eliminating pain and enjoy the company you are with!!  Also, find people who will get excited with you when you find a new food item you can have and love!! Doesn’t matter what that is! If you need someone for that task, or to share a short vent or pity party I’m happy to lend an ear!!

Hope this was helpful and inspires someone to look into food as their source of pain and/or healing!!!